Custombiped ONE is the first complete robot produced by Custombiped. The robot is able to perform human-like walk, and has complete human proportions in its mechanical design. The main specifications of the robot is:

A prototype image of Custombiped ONE can be seen below: 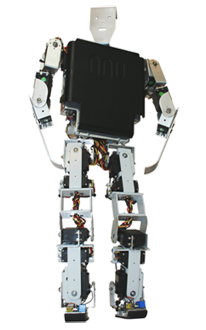 Custombiped ONE can be bought by contacting us with the information provided from our contacts page. A more detailed description of Custombiped ONE is given below.

The mechanical solution used on Custombiped ONE is completely customized. From a starting point, the requirement was that the robot should utilize the benefits of having human proportions. First the height, of 58 cm, was determined. Using this height the proportions of the limbs (arms and legs) could be calculated using the golden ratio found in the human proportions. As the robot should be able to turn while walking, the legs was given 6 degrees of freedom. The robot is able to turn while walking, by using a specially designed hip, which haves 3 degrees of freedom.


Low level is drivers to actuators and sensors


High level is interface to user and behaviour


The control system handles the overall motion and stability of the biped robot. With system it is ensured that the robot maintain balance during stance, walk and work.


Our control system is layered in two and can therefor easily be distributed on several processors for optimization reasons. This further enables you to order either or both of the systems.


Both upper and lower-level control relies on both internal models and feedback from sensors. When using models, internal states can be used as feedback to increase stability and precision. Feedback from sensors is used to make the robot able to respond to changes in the surronding environment.


HONDA reveals their new version of the ASIMO robot in Barcelona. The robot has new improvements on running speed and human interaction. The robot is 1.2 meters high and weighs 43 kg. Read more about the robot and watch a video here.


The home page is up and running. Explorer our page and take a look at what we have to offer.